…okay, that might be a bit of a stretch (has anyone ever really wanted to go back to high school?). But I am becoming increasingly jealous of the technology now available to students.

In particular, ever since the iPad came out, I've been waiting for someone to do a really good run at digital textbooks, as the interactivity and portability of a tablet makes so much sense for learning and understanding concepts like physics, mathematics, and chemistry. Imagine: instead of needing to decipher how a static graph or model would change with different inputs, you could modify them yourself and see it change in real time. 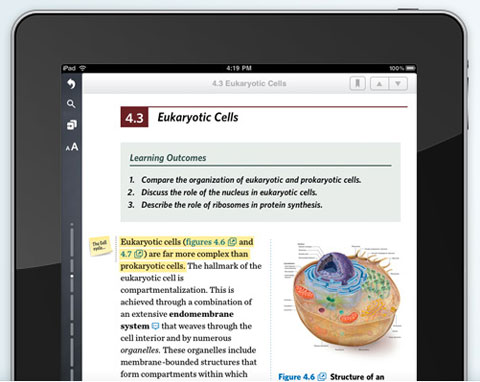 There has always been interactivity in learning. Whenever a student puts up their hand to ask a question, they are creating a chance to expand upon material that is otherwise ambiguous or difficult to grasp. But think about all of the good questions that don't get asked because the student is shy or embarrassed, or the timing is inopportune (they are wondering about a scientific definition during French class, for example). A fully-engaged classroom is magical when it happens, but it's also very easy to fall away from that idyllic state. So anything that makes a good question less likely to get lost in the process is a huge asset to education.

I wasn't expecting Apple to be the one to tackle digital textbooks, but they seem to have done a pretty good job of partnering with some of the big players to pull it off. This makes sense, given the company's previous successes in design and digital distribution models, and its continued interest in education. While there is reason for some concern over the iBooks' Author licensing terms, they seem like ones that could be addressed using more competition, both in authoring tools and distribution platforms.

If you have an iPad handy, you can check out a sample biology textbook — E.O. Wilson's "Life on Earth" — for free. I took it for a spin, and despite not seeing much that hasn't been done already in WIRED's digital magazine, it gave a great glimpse of what interactivity could do for a textbook. With WIRED (or, I imagine, most digital magazines), the interactivity still seems a bit contrived, but when reading a textbook, you feel like asking, 'Why has it taken so long to get here?' Considering that the basic iPad is about as expensive as five or six heavy, quickly-outdated textbooks, an economic argument could be made (in addition to the 'cool' factor) for outfitting schools with digital libraries.

So where might "the cloud" fit into something like this? A likely suspect would be in the systems used to deliver any digital products, as more and more companies either outsource their infrastructure to a commercial cloud provider, or implement their own private cloud to simplify server management. But I think that's only scratching the surface of what the combination could provide.

Cutting-edge scientific research, often involving huge data sets and enough CPU cycles to crunch through them in a timely manner, is a perfect fit for cloud computing. Not only does it enable researchers to share resources that they may not be able to individually afford, through virtualization and machine images it reduces the amount of expertise needed to set up a research platform. Once someone has set it up for the first time, the image of that machine can be used to create any number of other virtual research machines.

So why not give high school classes a window into the production behind the knowledge that will show up in future textbooks, in real time? Imagine flipping the page in your digital textbook and finding a virtual experiment you can run right there. Plug in a few numbers, tap "Go", and behind the scenes a cluster of virtual machines would take off to figure out the results.

Cloud technology and digital textbooks are both about reducing barriers of entry; the cloud removes the need to purchase hardware and set up network connections in order to crunch big data and publish it to the world, and digital textbooks reduce the barrier of entry to a high-quality, interactive education. Together, they're sure to provide some compelling new tools for educators over the next few years.